Under Articles 53 and 54 of the ICSID convention, once a tribunal renders a final award, it is binding and enforceable by each contracting state to the convention.

That said, an exceptional remedy in the context of the ICSID system is available to a party seeking certain post award remedies (i.e., interpretation, revision or annulment). That remedy is a stay of enforcement of the award. The stay is provisional when requested with a post-award application filing, and then becomes a matter for an ad hoc committee to rule upon once constituted.

Between 1985 and 2020, ICSID ad hoc committees and tribunals rendered 81 decisions and orders on stay of enforcement applications. In this article, we briefly examine those decisions, as well as consider what actions claimants should take to formulate an effective award enforcement strategy, both before and after a stay of enforcement decision has been rendered. 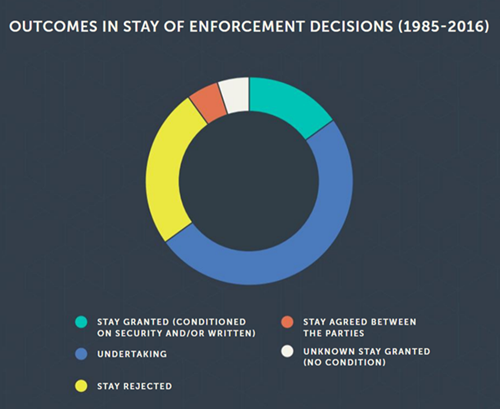 It is unlikely that ad hoc committees more recently constituted will depart from this trend in deciding future stay of enforcement applications. Indeed, in ten of the 11 pending annulment proceedings involving the same sovereign (Spain), ICSID has appointed repeat ad hoc committee members, a trend likely to contribute to a consistent line of decisions. 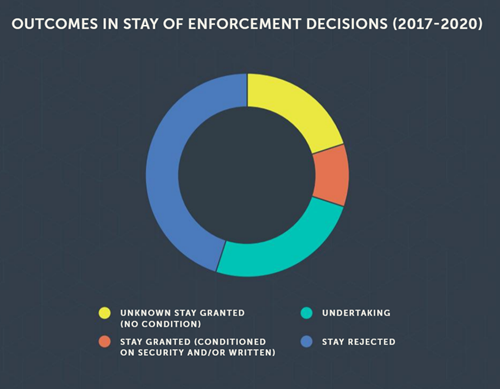 Claimants can engage an asset recovery team at various points during an ICSID arbitration, but it is most effective if a team is instructed between the first session held by the tribunal and the declaration that the proceeding is closed. During this period specialists will begin to build the research that will be needed throughout the arbitration. Before the tribunal renders its award, an asset recovery team should help the claimant understand the respondent state’s global assets (a broad scope in order to whittle down the list later). The complexities inherent in pursuing a state include the sovereign immunity doctrine and commercial purpose test; whether another claimant is seeking to enforce an award; and some geopolitical context.

Once the tribunal has rendered its award, an asset recovery team can provide further insight into the respondent, its international asset profile, ownership structures and vulnerabilities. For enforcement against sovereigns, and from this stage onwards in an ICSID arbitration, a crucial part of an investigation is to identify information that can help enforcement counsel build arguments of alter ego. Determining whether an instrumentality is an alter ego of the state is vital if that particular state-owned enterprise is the owner of a symbolic or valuable asset. From instruction, asset recovery specialists should consistently refresh who the decision makers are within the respondent state—particularly important if power struggles are interwoven in a tumultuous political system. It is also valuable to gather intelligence on the respondent state’s key commercial counterparties. This research can help identify funds owed to the sovereign whose payment might be disrupted or intercepted. Assistance can be provided to the claimant in putting a counterparty on notice of money transiting to a state that might be subject to attachment.

A claimant may also be advised to consider subpoenas and other targeted orders of discovery against third-party financial institutions. A sovereign’s exposure to international markets makes it susceptible to discovery and thus it is possible to identify transactions involving key state-owned enterprises and assets.

Asset recovery's involvement after a stay of enforcement is requested

After a stay of enforcement is requested, under ICSID rules a provisional stay of enforcement goes into effect until the annulment committee rules on the request. When counsel seeks to lift the stay, an asset recovery team can provide details for counsel, preparing submissions on briefs on this potential stay. At this point in an arbitration, substantiating whether the state can pay the award is essential. Such an evaluation can be made by reviewing the country’s cash, investments, real estate assets, sizeable commercial enterprises and sovereign bonds. Documenting that the state is shielding or dissipating assets to resist enforcement is critical and is a prime example of why investigations should begin before annulment is reached: There needs to be an established comprehension of the respondent’s asset profile, patterns of restructuring and any plans of privatization of state owned enterprises.

A thorough risk assessment should be conducted on whether the respondent state will not comply with the award if it is not annulled. Factors to consider are whether the respondent has missed a payment to an international body or has demonstrated obstructionist behavior; whether government officials have criticized ICSID; and whether the state will try and argue that allowing enforcement of the award and denying the stay would have “‘catastrophic’ immediate and irreversible consequences”.4 Asset tracing, investigations and an assessment of enforcement should be embedded components of an ICSID arbitration in order to maximize a claimant’s success with recoverability against a recalcitrant sovereign, rather than being a worst case afterthought.

Despite ICSID ad hoc committees historically granting stays of enforcement with relative ease, recent trends suggest a growing reluctance to grant stay of enforcement requests. With that in mind, it is crucial for claimants and their counsel to be well-equipped to enforce ICSID awards against respondent states during the stay of enforcement decision making process. Engaging professional asset recovery specialists can provide vital intelligence which can help formulate an effective award enforcement strategy whether or not a provisional stay of enforcement is in effect.

Jeffery Commission is a Director with responsibility for overseeing Burford’s underwriting and investment activity in investor-state and international commercial arbitration. Prior to joining Burford, he practiced litigation and arbitration with Shearman & Sterling and Linklaters and was a Senior Associate in international arbitration at Freshfields.

Phoebe Waters is an Analyst and member of Burford’s asset recovery team, which has earned top rankings from Chambers and Partners. Prior to joining Burford, she worked as a crisis management analyst in the Office of Global Security at Goldman Sachs.

[1] Masdar Solar & Wind Cooperatif U.A. v. Kingdom of Spain (ICSID Case No. ARB/14/1), Decision on the Kingdom of Spain’s Request for a Continuation of the Stay of Enforcement of the Award, 20 May 2020.

[2] Infrastructure Services Luxembourg S.à.r.l. and Energia Termosolar B.V. v. Kingdom of Spain (ICSID Case No. ARB/13/31), Decision on the Continuation of the Stay of Enforcement of the Award, 21 October 2019.

[4] Maritime International Nominees Establishment (MINE) v. Republic of Guinea (ICSID Case No. ARB/84/4), Interim Order No. 1 on Guinea's Application for Stay of Enforcement of the Award, 12 August 1988.