Trends in collective redress across Europe: Legal finance as a tool for institutional investors and commercial claimants

With European regulators increasingly cracking down on anticompetitive behavior, and instances of largescale fraud and corporate misconduct likely to be unveiled by a down economy, collective actions are an important mechanism for commercial parties to seek redress.

While opt-out style class actions are a mainstay of the US litigation landscape, collective action regimes across Europe and the UK take many different forms, and at present there is very little harmonization across jurisdictions. However, the implementation of the new EU Directive on representative actions will see more EU member states adjust their domestic laws to include representative action mechanisms for a variety of consumer and commercial disputes.1

For example, international law firms with established shareholder litigation practices are increasingly filing collective actions across Europe and the UK: Quinn Emanuel has filed cases against VW and Wirecard in Germany, Scott+Scott has filed against Airbus in the Netherlands and Pallas Partners recently filed against Glencore in the UK. It is likely that we will continue to see more group securities litigation in Europe as collective actions become more common.

This article addresses some of the salient trends in the collective action space across Europe and clarifies the role of legal finance in empowering institutional investors and businesses to seek redress when they are harmed by malfeasant activity, whether it be through anticompetitive behavior, fraud, data privacy breaches or other tortious or illegal activity.

The Netherlands has emerged as a leader in collective securities claims

Over the past decade, the Netherlands has become a leading jurisdiction of choice for collective actions, particularly in the securities context.

Despite being a forerunner for collective actions in Europe, the Dutch courts were until January 2020 available to claimants to seek damages only by asserting a direct claim in their own name or assigning their claim to a special purpose vehicle. The introduction of the Settlement of Large-scale Losses or Damages (Class Actions) Act (WAMCA) has since allowed Dutch foundations to seek damages in collective proceedings; previously, such foundations could only seek declaratory relief.

Largescale activity in the securities litigation collective action space is especially evident in the Netherlands. Three of the five largest securities-related settlements outside the US ever were recorded in the Netherlands, including the €1.4 billion Steinhoff International Holdings NV settlement in February 2022—the largest settlement of its kind outside of North America.2 In this case, Burford represented one of the claimant shareholder groups, consisting of several of the world’s largest asset managers, including three of Steinhoff’s five largest institutional shareholders.

In anticipation of increased collective action litigation in the Netherlands, several US and UK claimant law firms have opened offices in the Netherlands in recent years, including Scott+Scott, Hausfeld and Pogust Goodhead. We have also seen a surge in the number of cases brought under the WAMCA across a broad range of subject matters, ranging from data privacy to environmental damage.

The assignment model to bundle cartel damages claims has been confirmed by courts in the Netherlands and Germany over a number of recent cases.

In essence, the European assignment model involves a third-party special purpose vehicle (SPV) bundling claimants’ damages claims together and pursuing them in the SPV’s own name, bearing all the costs associated with the enforcement of the claims and receiving a success fee in return. In larger cases, the SPV to which the claims are assigned often enters into an agreement with a legal finance provider to finance the pursuit of these matters to manage the high costs and risks of potentially long-lasting litigation. Litigants benefit from pooling their claims because claims aggregators working with professional legal finance providers handle many similar cases, giving them significant expertise, extensive data and negotiating leverage, with resulting economies of scale.

While the permissibility of assignment models had never been called into question (provided the legal service provider had adequate funding), this changed with Financialright’s case against VW in Germany—at least temporarily. Largely based on scholarly publications commissioned by VW, several lower instance courts held that Financialright’s assignment model was in breach of the German Legal Services Act—even though the Federal Court of Justice had already clarified, in its Lexfox and AirDeal decisions, that claims aggregators could bring cases in court, work on a contingency basis, and bring bundled claims.

With the Financialright decision, the Federal Court of Justice settled all outstanding questions and expressly clarified that the admissibility of the assignment model is “beyond doubt”.3 This is a desirable development for claimants as the cost and risk of asserting even the most substantial cartel damages claim individually can ultimately exceed the damages claimed. Pooling claims together allows claimants to pursue meritorious claims that would be uneconomical to pursue on an individual basis.

Post-Financialright, assignment model litigation is not only here to stay but, critically, has been reaffirmed by the Federal Court of Justice, as the path to collective redress in Germany in the absence of opt-out class actions.

A decline in leniency activity within the competition space

Leniency programs are a crucial tool for uncovering cartels, which are by nature difficult to detect. Under the European Commission's (EC) leniency program, companies that provide sufficient information about a cartel in which they have participated may receive full or partial immunity from fines. In “game theory” terms, the leniency program aims to create a prisoners’ dilemma for the cartel members: Encouraging cartelists to come forward by offering a financial incentive to cartel members and creating a continuous threat that one of the other members may blow the whistle.

However, the number of leniency applications is decreasing in recent years.4 The increasing cost and risk associated with obtaining immunity from different jurisdictions around the world, combined with private enforcement risk, appears to create insufficient incentives for companies to apply for leniency.

This is a worrying new reality for companies that are unknowingly being harmed by the anticompetitive behavior of cartelists. If the incentive to blow the whistle on a fellow cartelist is not economically credible or valuable, then cartels are far less likely to be uncovered and misconduct will remain unreported. This is even more concerning given the potential for new sophisticated ways for cartelists to collude, such as through algorithmic collusion.5

The practical effect of the decline in leniency applications will be fewer EC enforcement decisions and, in turn, fewer damages claims. In the absence of regulatory findings, claimants will need even greater financial resources to pursue “stand alone” private enforcement competition claims and will need to be able to invest time and money into significant data analysis to detect collusive behavior themselves.

When companies are harmed by anticompetitive behavior they have a right to be compensated. But the significant costs of high hourly rates and the upfront expenses of bringing a claim –as well as potential exposure to adverse costs–can be challenging, especially for claimants that have endured financial hardships as a result of collusion. Moreover, these costs may be disproportionate to the size of the claim absent some bundling of claims. It will be even more cost prohibitive to bring competition claims in Europe if claimants also have to conduct rigorous private investigations to uncover and prove the existence of collusive behavior themselves. For these reasons, legal finance is an even more important tool than ever before to empower companies that have been harmed by anticompetitive behavior to pursue redress.

Legal finance has a role to play in European collective actions

Collective action regimes across Europe are undergoing a period of robust and sustained development. The ability to bring claims en masse through a collective action mechanism makes meritorious claims more financially viable even for the most sophisticated businesses. As Advocate General Jääskinen, as he then was, recognized in his opinion in CDC Hydrogen Peroxide (case C-352/13), claims aggregators can pursue claims where it is regularly “not reasonable” even for corporate victims to pursue claims individually.6

Legal finance will inevitably play a role, as even large companies and institutional investors with significant financial firepower will find pursuing damages for harm caused by rulebreakers extremely costly and likely to divert valuable resources away from business operations and investment in innovation and growth. Legal finance providers can offer value beyond their financial support by helping clients develop and implement litigation and settlement strategies that align with their unique interests and business objectives and which ultimately help to save internal management time.

While there are a number of legal finance providers with operations in Europe, Burford is well placed to help clients and law firms pursue collective actions, with team members across continental Europe and London. For high risk, high value securities and competition claims, Burford is the clear market leader, multiples larger than its nearest competitor with the capital and experience to make large, complex investments. When institutional investors or corporates are harmed by rulebreakers, partnering with a legal financier with the capacity to fund large-scale claims and the expertise to navigate complex proceedings makes the difference in both pursuing damages claims and in achieving a favorable resolution.

Philipp Leibfried has been Burford’s UK and European Counsel since 2017 with responsibility for assessing and managing Burford’s legal risk across geographies, particularly in the UK and Europe. Prior to joining Burford, he spent nearly a decade at Freshfields in London. From early 2023, Philipp is taking on a new role as Head of Europe to lead Burford’s continental European business. 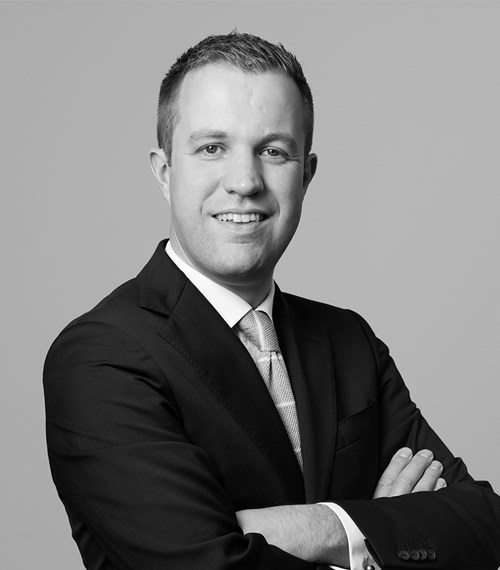 Jörn Eschment is a Senior Vice President with responsibility for Burford’s litigation finance activities in Europe and Asia. Dr. Eschment joined Burford in 2018 and leads its investment arm in Germany, Austria and Switzerland and specializes in assessing, underwriting and managing arbitration, antitrust and consumer mass litigation matters.

Charlie Rooke is a Vice President with responsibility for assessing and underwriting legal risk as part of Burford’s investment team in London, with a particular focus on complex commercial, competition and securities litigation matters in the UK and Europe.